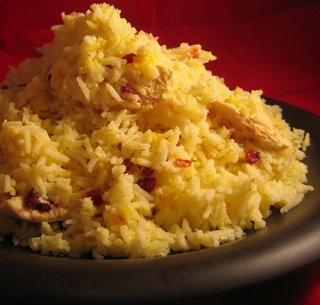 This month Owen decided that Paper Chef should involve Barberries, Pumpkin, Spinach and Slow. I was rather pleased with the line up ; I had suggested barberries as a Paper Chef ingredient a wee while ago when I was seduced into buying a packet by the salesman's description of the tart red berries. Sadly, they had sat in my cupboard, unopened, until now. I had some pumpkin in the fridge and the silverbeet (my substitution for spinach) was looking perfect out in the garden, begging to be used for dinner. And slow . . . the perfect way to make a Monday night dinner!
When I first bought the barberries I found a recipe in Claudia Roden's The New Book of Middle Eastern Food

for rice with chicken and barberries. The recipe describes it as the most famous and traditional of Iranian recipes, turning out like a pie with a crisp brown crust. To tell the truth this is what I set out to make this evening, but it is not what I finished with. As I was preparing the recipe I kept thinking this was rather like a biryani, so I decided to turn it into that instead, rather cunningly named as barberryani, do you not think!?
So that is the barberries, and, being slowly cooked at a low temperature with some of my homemade yoghurt, the Slow taken care of. 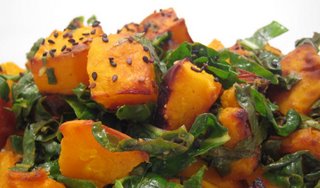 The pumpkin and silverbeet I turned into a warm salad, going rather well with the barberryani, both in terms of colour and flavour and Paper Chef.

Sauté the chicken breast in a little olive oil, sprinkled with salt and pepper, until golden and almost cooked. Cut up into large bit-sized pieces.
Cook the rice in boiling water until almost, but not quite, cooked. A grain squished between your thumb and forefinger should have a chalky inside. Drain.
Beat together the yoghurt, egg, saffron and its water, and salt and pepper.
Mix the chicken into the yoghurt mixture to coat, then remove the chicken to a plate.
Mix the rice with the yoghurt mixture.
Heat a heavy bottomed pot with a lid over a low heat with a coating of olive oil. Tip the rice and yoghurt mixture into the pot and push the rice up the sides to make a shell. Sprinkle half the barberries over the bottom layer of rice-yoghurt then add the chicken pieces then the rest of the barberries. Cover with the rice from the sides and push down gently to even the mixture. Cover and cook slowly on a low heat for about an hour or until the top feels nice and hot. Turn out onto a plate or into a shallow bowl to serve.

Warm Pumpkin and Silverbeet Salad
serves 4 with the Barberryani

1/4 of a large pumpkin, peeled, seeded and cubed
olive oil
salt and pepper
3 large leaves of silverbeet (or a couple of handfuls of spinach), shredded
1 clove of garlic, minced
1 lemon, juiced
Black or normal sesame seeds

Looks delicious and a very clever play on words! ;-)
I've never seen Barberries, I shall be on the look at for them now though.

Emma,
That is a fantastic biryani recipe! I love your cooking method. If I were to use store bought yogurt, what would you recommend. Would a greek-style yogurt do the job? Must it be full fat?

What a clever name! [i was thinking 'barbarian' when i read the comment at tomatilla, but it made complete sense when i read your entry] And what a tasty dish - the starting point sounds like a reecipe similar to the one i made, only a bit quicker (in a good way!).

julie, i used a greek yogurt in my persian creation (mixed w/ low-fat dannon, i didn't have enough greek) - that would probably work just fine in place of homemade.

Bron - let me know if you can't find any, I would be happy to send some down!

I don't think the type of yoghurt would really matter, as long as it was proper yoghut if you know what I mean! Greek would be good, but this batch of my homemade was quite thin, so I don't think it would matter.

emma , I love barberries...the barberry rice is my fave Persian dish. I have a whole stash of them in the freezer... they freeze very well. My MIL sends me a ton of them from Iran.

Something in the list of ingredients seemed to suggest 'Persia', I think!! I've never had barberries...tart and sweet?
Clever name!

The Paper Chef 22 Winner has been announced. Your Persian inspired dish is delightful to look at and looks delicious. Thanks for participating.