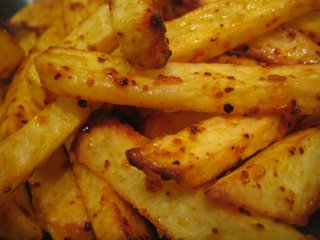 Here's a Friday night idea for you : Spicy chips eaten with mushy peas and vinegar.

Peel the potatoes and cut into fat chips. Put in a bowl of water in the fridge for at least 30 minutes.
Preheat the oven to 210°C, and put a large baking tray in to heat. Big enough to hold all chips in one layer. If there are more than two of you then you might need two trays.
Drain the potatoes and dry in a tea towel.
Toss in a dry bowl with enough olive oil to generously coat then toss to season with some cayenne, pepper and salt.
Spread out in one layer on the now hot baking tray and pop in the oven.
After 10 minutes turn the chips over. After another 10 they should be cooked, golden and delicious.
Serve with hot mushy peas and plenty of vinegar and relax . . .

These chips are reminiscent of the KFC beauties, a Friday night treat if ever there was one. Turn on the telly and enjoy!
Posted by Emma at 6:49 pm

Looks like a great side dish. Thanks for sharing your recipe.