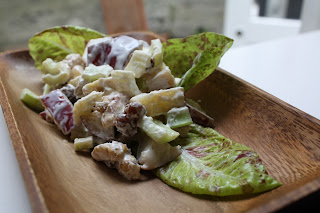 Mix the yogurt, mayonnaise, lemon and salt and pepper together for the dressing then stir through the salad ingredients. Serve the Waldorf Salad on top of some pretty lettuce leaves.
Posted by Emma at 11:36 am 1 comment: