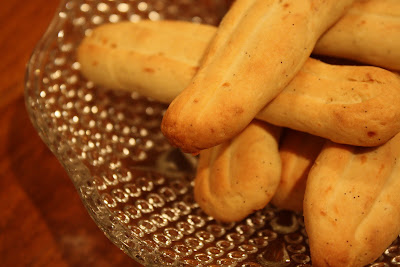 As I have mentioned G was sick on his birthday, and as I have also mentioned chocolate Guinness cake is part of the birthday tradition. So, the Wednesday prior I prepare for the G-birthday by a supermarket trip for cream cheese and a can of Guinness (most other ingredients found in house by rote). So when I find myself stocked but without cake audience I have to consider my options :

[Lucky am I that the dairy product purchased in August does not expire until the following January - is it just me or is this just a tad alarming?]

So cream cheese then, obviously the Guinness is easily dispensed. How to use? With smoked salmon? Yes, but there is only so much one can eat. So to baking I go :

Cream the cream cheese and sugar until light and fluffy. Mix the egg and vanillas in lightly but thoroughly. Blend in the flour, baking powder and salt, but only until mixed - no more!

Roll into log shapes, marking tops as you like, and bake for 15 minutes or until firm and turning golden.

We find these biscuits a bit like a sweet cakey bread - yum!
Posted by Emma at 10:00 am 3 comments: 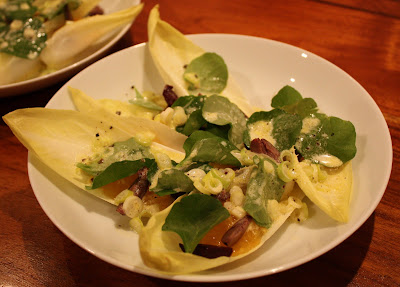 Ah, Witloof : endive, witloof, chicory, escarole. Who are you? What to call you?

Email ThisBlogThis!Share to TwitterShare to FacebookShare to Pinterest
categories: starters

Schnitzel. One of the biggest food compliments G has given me was when he said that my schnitzel was even better than his Austrian friend Reinhardt's mum's Wiener Schnitzel. That was saying something.

[For the record the other biggest food compliment G has given me is that my apple pie is better than his Uncle Bob's mum's apple pie.]

Anyway, when it is G's birthday I like to ask what he fancies for the weekend's festivities and augment that list with his favourites. Strangely enough, rabbit generally features on both. However this year G was sick and so was the butcher's variety ; no rabbit. But a couple of weekends later at Moore Wilson I found the rabbit - lots and lots of rabbit : fillet, loin, leg and complete muscular bodies all ready to lop. But what to do?

Now, if you have tried to cook rabbit you may also have had the misfortune to produce dry, gamey rubbish. Feel my fear. But what better way to protect from dryness than to coat in crumbs? Veal schnitzel is often a bit tasteless, expensive and hard to come by, but rabbit : flavourful, pleantiful, presentable. Hence, I present rabbit Schnitzel :

Trim the silver skin from the fillets and flatten to a uniform thinness with a meat mallet. Flour, egg and crumb the flattened fillets and refrigerate for 30 minutes.

Heat a heavy bottomed pan and when at medium-high heat add olive oil and a knob of butter. Fry Schnitzels until golden on each side Keep warm in a low oven until all are cooked. Serve with mashed potatoes and peas.