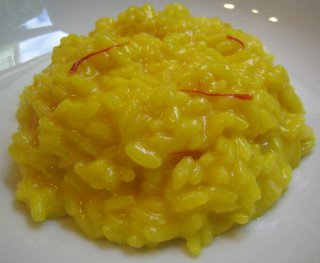 My favourite risotto! I love the colour and I love the simplicity and I love the taste. Saffron is a wonder food to me, and the inclusion of it in this risotto was bound to win me over. And, just to name name drop a wee bit, the first time I had this was in Milan. Romantacising or not, who could argue that the setting could not be better. Actually that whole evening was wonderful, despite that we had arrived from Scotland via Heathrow without our bags, and as you might imagine, Milan is not the best place to feel shabby. One bag turned up the next day, the evening of which we found a fabulous neighbourhood restaurant, with all the atmosphere one could wish for ; the electricity went out whenever the coffee machine was used, the waiters were amazing and the food divine. No wonder the risotto Milanese formed such a great impression.

In my version I use marrow ; it adds such a wonderful unctuousness. If I am serving this with osso bucco then I will push the marrow from the bones before cooking and use it in the risotto.

Bring the stock to a gentle simmer and add the saffron.
Melt the butter and marrow in a large frying pan or shallow saucepan over a medium heat and saute the onion and garlic until soft. Add the rice and stir well to coat the rice in the fat. Add the white wine and stir until the liquid has been absorbed. Add a ladleful of the simmering stock and again stir until the liquid has been absorbed, but the pan is not completely dry. Continue adding the stock, a ladleful at a time until is all used and the rice is al dente. You may need to supplement the stock with water, or more stock and you might not use it all.
Remove the risotto from the heat and stir in most of the Parmesan. Serve in warmed bowls, sprinkled with the remaining Parmesan.

The best way to enjoy making this is with a glass of wine and someone nice to keep you company while you stir, although, alone with the wine, it is a lovely meditative half hour.
Posted by Emma at 7:46 pm 6 comments: 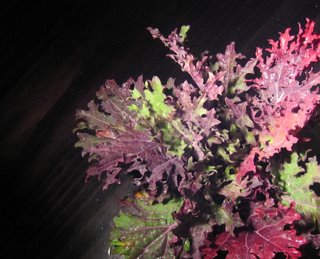 I have no idea what this leafy green vegetable is called. It is very similar to curly kale, but not as curly, and also not as green. It has the same tough leaves that do not disintegrate and let out water like spinach or silver beet, but also not as tough, but I don't think you could eat them raw. It has a tough stem to each stalk with the edible leaves attached sporadically along the length.

A bunch of this has been in our organic vegetable box for the last few weeks. Being a big fan of curly kale, I have been loving seeing the bunch of purple and green appearing in the box.

Wash and strip the leaves from the stalk, tearing into bite sized pieces. Heat a wok, a when hot add a small amount of peanut oil. Add some chopped garlic and chilli, stir-fry briefly then add the leaves. Continue to stir fry until bright green and tender. Serve sprinkled with some toasted sesame oil and salt and pepper. 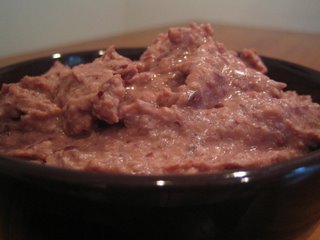 As I was spring cleaning the cupboards the other day (I do seem to do this alot!), I found two packets of kidney beans that I just had to use up - they had bean(!) there much too long. I was hunting through the cupboards looking for some chickpeas I thought were there so I could make hummus. No chickpeas, so there was nothing for it but to make kidney bean hummus. I could only imagine the pleasing pinkness that would result!

I soaked both packets overnight in cold water. Then drained and rinsed and boiled for 10 minutes to get rid of the phytohaemagglutinin, before simmering for 40 minutes or so until they were tender. I used some of the cooked beans for a kidney bean curry (wonderful - recipe to come), some went into the freezer to add to something else sometime, and the rest turned into hummus. I struggled with what to call this because hummus means chickpea - no-hummus hummus, kidney beannus, but in the interests of resisting silly names and because you know what I mean kidney bean hummus it is :

Puree the beans and the garlic in a blender or with a stick blender, I don't find a food processor works very well making it grainy. Of course a pestle and mortar or a potato masher are not out of the question either! Add the remaining ingredients mixing well adding more or less as you like, and perhaps some water if it is too thick but lemony enough. Serve as you would hummus. This freezes well too.
Posted by Emma at 2:17 pm 4 comments: 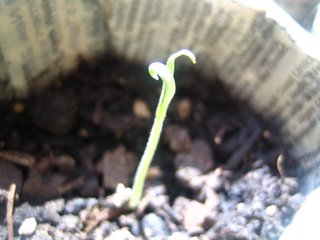 A springtime menu, for when you want to take advantage of the new season's offerings!

Main
Lemon and herb chicken with couscous and salad.
Slice chicken breasts horizontally to make thin escalopes then marinate in olive oil, lemon juice and chopped fresh herbs. Preheat a griddle. Prepare some couscous using chicken stock, salt and pepper, and fresh chopped herbs. Cook the chicken and serve on the couscous with a salad on the side. 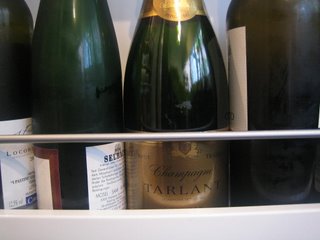 I haven't participated in a Wine Blogging Wednesday for a while, but I just had to join in with Sam's theme of Champagne! Especially since I had the terrible task of having to choose a bottle of champagne for G's birthday!

I asked at our favourite wine store Rumbles, perfectly happy to stick with the usual Verve or Bolly, but to quote Scott :

"If you want boring old Veuve or pricey Bolly that's cool, however if you haven't tried our Tarlant wines then I recommend you give them a go."

Well, if he is going to put it like that, how could I refuse!

We decided to try the Tarlant tradition, which was described as Dry, yeasty, Bollinger.

We opened the bottle as planned for G's birthday accompanied by some roasted nuts and olives. Not sure if it was the best food combination but we rather enjoyed it!

To describe the wine : It was dry and yeasty, and if my memory was better I could probably agree it was like Bollinger. It had a lovely clean fizz and a good flavour, slightly fruity, but not overly so. It was golden and had a good quantity of bubbles.

We were very impressed with our departure from the norm, and I think this will be featuring in our fridge again.

We were also able to try the Prestige '97 vintage at a wine tasting a week or so later, but too be honest, and I probably shouldn't admit this, but we rather prefered the Tradition which is the cheaper sibling. Oh well, I suppose that means we can have it more often!
Posted by Emma at 3:23 pm 4 comments: 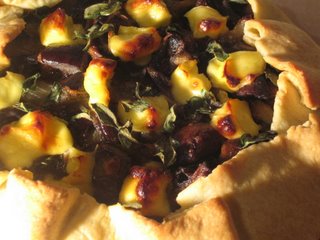 A few ideas came and went for this round : a quiche, a pie, but when I got home last night and had the urge for a vegetable packed dinner I decided to make a vegetable pie. And to make it easy I thought I would try out a free form tart style. For some reason I have shied away from a tart made without the safety of a tin simply because I was afraid it would just collapse during the cooking. So imagine my surprise when not only did it not collapse, but turned out to be the crispiest, most perfectly cooked tart I have made? It must have been that the air could circulate so freely around the whole tart. 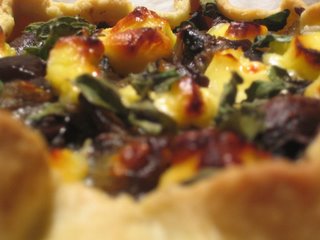 Filling
1 small aubergine, cut into large cubes
400g mushrooms, halved
1 onion, cut into large chunks
2 tablespoons of olive oil
whole cloves of garlic, as many as you like, I used about 8
salt and pepper
100g feta, cubed
fresh marjoram leaves

Filling :
Toss together all the ingredients for the filling except the feta and marjoram and bake for about 30 minutes or until cooked and sticky and fairly dry. Set aside to cool.

Pastry :
Pulse the butter, flour and salt in a processor until it resembles course crumbs. Add iced slowly water until the dough just starts to come together. Tip out onto the bench and bring together into a ball. Wrap in plastic and rest in the fridge for at least 30 minutes.

Tart :
Roll out the pastry to approximately 1/4 centimetre thick into a rough circle on a piece of baking paper. Tip the filling into the middle of the circle and spread out slightly to an even layer, staying away from the edges. Crumble the feta and marjoram leaves on top. Fold the edges of the pastry up to form a shell. Rest in the fridge for at least 30 minutes. Bake for 40 minutes, or until the pastry is crisp and golden Cover the exposed filling with a piece of foil during the time if you feel it is browning to quickly, removing for the last 10 minutes.

Cut into wedges and enjoy with some steamed greens or a crispy salad.
Posted by Emma at 8:58 am 8 comments: 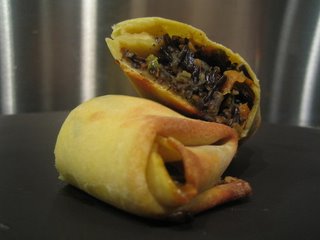 Paper Chef round 20! I found the list of ingredients at Tomatilla! rather challenging. Especially as I wasn't going to have a chance to get to the shops before the deadline. Luckily, I was able to approximate the required ingredients :

Eggs,
Black fermented soy beans,
Giblets and
Something that reminds you of Africa

Eggs
Soy sauce - fermented soy beans, isn't it?!
Stock, made from a chicken including the giblets - a cop out perhaps, but mainly just doing what I am told!
Rice - I chose to use wild rice, because it is something that Africa can claim as indigenous.

For the wrappers, makes about 8
1 cup of rice flour
1 egg
pinch of salt

Mix the ingredients together to form a stiff pasta like dough adding water as required. Knead until smooth. Rest for at least 30 minutes. Divide into eight and roll as thinly as possible.

Saute the onion and garlic until soft and turning golden, add the carrot, peppercorns and rice, stir well. Add the stock, bring to the boil and then turn down to a simmer until the rice is cooked, and the liquid is absorbed about 30 minutes. If too much liquid remains, add a bit of cornflour slacked with a wee bit of cold water to thicken the sauce. Stir in the cabbage.

Divide the filling among the wrappers, but do not over fill (you might have some filling left over). Roll into rolls or parcels. Brush with sesame oil and bake at 200°C for about 20 minutes or until golden and crispy.

Serve with a dipping sauce made to your taste with chilli sherry and soy sauce.