An easy nibble, to start a meal.
I just love feijoas, and like to eat as many as I can in their short season, a season which is rapidly coming to an end, filling my with a sense of urgency - I must make the most of this most delicious fruit.

My friend Mel gave me her mother's feijoa chutney recipe, which with her permission I pass on to you. I have cut the recipe down to quantities that suit me. A jar of chutney probably lasts me six months, so the amount below gives enough for me and some to give away - sharing the joy with home made preserves.

Put all ingredients in a large saucepan. Bring to the boil and cook gently for 1½ - 2hrs until the chutney is thick. Pour into steralized jars and seal.

Thanks Mel, and I hope you have a lovely time on your travels!

Email ThisBlogThis!Share to TwitterShare to FacebookShare to Pinterest
categories: accompaniments

Who would have thought there is reptile in here?
Bron is hosting a very clever event - Wild Food - Edible Reptile, in which one prepares reptile to eat. What a great idea, certainly sets you thinking. Maybe even makes you a little scared.

I decided to use tuatara. Tuatara is a lizard like, nocturnal reptile, native to New Zealand. There can be a fair amount of meat on a tuatara since they can grow up to 60 cm and weigh 1 kg in their 100 years. They are scaly, crested and have 3 eyes. Tuatara are fairly easily found in the Wellington region, especially in Karori.

I actually got mine from Moore Wilsons, conveniently portioned and packed.

Of course, I mean Tuatara beer. As if I would eat an endangered species, even for Bron.
I had an idea to soak the dried beans for the chilli in the ale instead of water then cook them in the same liquid. I think it worked really well, adding a much greater depth of flavour.

Soak the beans in the beer overnight, topping up with water to cover generously.
Bring the beans to the boil in the soaking liquid, with the dried chilli, then simmer for an hour or until tender. The length of time can vary depending on the age of the beans.
Fry the onion and garlic until golden, then add to the beans with all the other ingredients, plus any others you fancy, more chilli for example.
Simmer for another couple of hours until the chilli is tasty, cooked and thick.
Serve with cornbread, rice or tortillas, guacamole, sour cream or yoghurt, feta and salsa.

As an aside, I was making cornbread to my usual recipe when I discovered that I had run out of flour, so I substituted chickpea flour with wonderful results - I think I might make that my usual recipe from now on!

You have until the end of May to enter Wild Food, so why not grab yourself a reptile and join in!
Posted by Emma at 6:10 pm 3 comments: 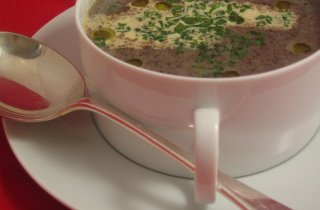 A bowl of grey-brown goodness.
I love mushroom soup, and this is a particularly good one, and interesting too. It is thickened with wholemeal bread instead of a roux or other thickening agent. Apparently, using breadcrumbs to thicken soup is a technique which has been used since the Middle Ages. I think it is a much easier and reliable method as well, no fussing about really, just pop the crustless slice in the soup.

A thick soup is a great comforting and warming meal, just right for these Autumn days. Over at Nihowera we are featuring soup this week - have a look!

Stew the mushrooms in the butter, adding half the parsley, thyme, garlic and seasoning when the mushroom juices start to appear. Soak the bread in a little stock. Add the break and stock to the mushrooms. Simmer for 15 minuted. Puree, add the cream, then reheat and check the seasoning.

Serve with a trickle of cream and the rest of the parsley sprinkled on top.

I also added a dribble of truffle oil, because I love it!

Email ThisBlogThis!Share to TwitterShare to FacebookShare to Pinterest
categories: soup

Nihowera is a collaboration between myself and Bron of Bron Marshall fame, fabulous chef and photographer extraordinaire.

Nihowera is a Maori word meaning :
Bron and I hope you enjoy Nihowera - go on, dive in!
Posted by Emma at 6:10 pm 2 comments:

Email ThisBlogThis!Share to TwitterShare to FacebookShare to Pinterest
categories: about

Yellow eggs, yellow butter.
Brioche is a rich bread, rich with butter and eggs. All those eggs and butter make the resulting bread a sunny golden yellow ; as is appropriate for Barbara's a Taste of Yellow event.

LIVESTRONG Day is the Lance Armstrong Foundation's (LAF) grassroots advocacy initiative to unify people affected by cancer and to raise awareness about cancer survivorship issues on a national level and in local communities across the country. LIVESTRONG Day 2007 will occur on Wednesday, May 16.
Brioche can be made with varying proportions of butter. The iconic petites brioches à tête are made with the most butter, but the loaf you see above has a more modest amount of butter - only half as much butter as flour. I find that this amount of butter gives the most versatile loaf, and is fairly easy to handle.

Some things to do with brioche :

Dissolve the yeast in the milk the mix in the flour. Leave in a warm place for an hour until it is frothy.

Beat almost all the egg into the sponge, reserving some for an egg wash before baking. I do this in my Kenwood Chef with the K beater. Then add the flour, sugar and salt beating until well mixed. Leave to rest for a few minutes. Beat in the butter, a piece at a time. Rest the dough in the fridge for at least 4 hours, or overnight.
Shape into a loaf, or buns, and leave at room temperature to double in size.
Bake at 180°c for about 30 minutes for a loaf, 15 for buns, or until the bread sounds hollow when tapped. Leave to rest on a rack for at least an hour before eating.

I have been asked why I called this blog The Laughing Gastronome.
In 1967 David Bowie wrote a song called The Laughing Gnome. Now, this song is a bit different than his usual work, but for some reason I find it hilarious! So what better way to pay tribute to something that has amused me than by naming my food blog as a pun on the title of a song that is full of puns itself. I mean, it isn't so strange, he does feed the [gastro]gnome roasted toadstools, dandelion wine, caviar and honey . . .

I was walking down the high street
When I heard footsteps behind me
And there was a little old man (hello)
In scarlet and grey, shuffling away (laughter)
Well he trotted back to my house
And he sat beside the telly (oaah..)
With his tiny hands on his tummy
Chuckling away, laughing all day (laughter)

Oh, I ought to report you to the gnome office
(gnome office)
Yes
(hahahahaha)

Well I gave him roasted toadstools and a glass of dandelion wine (burp, pardon)
Then I put him on a train to eastbourne
Carried his bag and gave him a fag
(havent you got a light boy? )
Here, where do you come from?
(gnome-mans land, hahihihi)
Oh, really?

(own up, Im a gnome, aint I right, haha)
Havent you got an ome to go to?
(no, were gnomads)
Didnt they teach you to get your hair cut at school? you look like a rolling gnome.
(no, not at the london school of ecognomics)

Now theyre staying up the chimney
And were living on caviar and honey (hooray!)
Cause theyre earning me lots of money
Writing comedy prose for radio shows
Its the-er (what? )
Its the gnome service of course

Email ThisBlogThis!Share to TwitterShare to FacebookShare to Pinterest
categories: about, vegetables

It seems so alive.
I bought my first block of fresh yeast. It cost about $2 and is big enough to make all the bread I could eat if I was to only eat bread for a month. I have shared it among my friends and family, and it is still going. I had read somewhere that fresh yeast only lasts two weeks, but I have had this wonderful item for three weeks now and it is still going strong.

If you like to bake bread, I whole heartedly recommend fresh yeast over dried.

Update : use twice the amount of fresh to dried yeast - both volume and by weight work.
Posted by Emma at 9:35 am 11 comments: