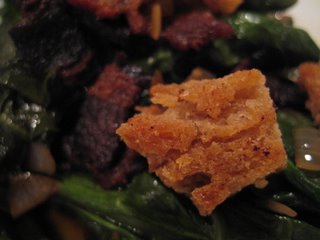 I had been resisting harvesting the spinach from the garden because it looked so nice. The aesthetic pleasure was at the cost of tenderness of the spinach leaves. They were ginormous and a bit holey thanks to the caterpillars. I harvested them this morning purely to make way for the broccoli. The problem with trying to be an organic small scale urban farmer [sic] is caterpillars ; caterpillars eat the plants you want to eat and then hold on (literally) for dear life as you are preparing them for your own meal. The best way I have found to remove the beasts is to soak the vegetable in several changes of salty water.

I wanted to taste my first spinach as unadulterated as possible. The sensible thing seemed to be to separate the (now clean) leaves into perfectly formed, could be eaten raw and bit holey, best cooked. The former are waiting in the fridge to be lightly steamed and eated alone. The latter were turned into a warm spinach salad. I realise I probably should have eaten the perfect leaves as soon after picking as possible to enjoy their splendor at their peak and all that, but I didn't.

3 rashers of streaky bacon, cut into small pieces.
1 shallot, diced small.
1 tablespoon of vinegar - sherry is good, otherwise whatever you have.
1 slice of good bread, cut into cubes.
A good double handful of spinach leaves, torn into pieces.

Combine the shallot and vinegar and leave aside for the shallot to soften.
Fry the bacon on a medium to low heat to allow the fat to render and the pieces to crisp.
When the bacon is starting to crisp and there is plenty of fat in the pan, but the bacon still has a wee way to go to be crispy, toss the bread cubes in the fat to absorb some of the fat then remove the bread to a pan in a warm oven, or another frying pan. The bread cubes are removed because we want to save some of the bacon fat for the dressing.
As soon as the bread cubes have turned into crispy croutons, throw the spinach into the frying pan and pour over the shallot and vinegar mixture. Toss until the spinach is just wilted then pile onto a plate and top with the croutons.

I can honestly say this was the most spinachy spinach I have ever had - wonderful. Was it because it was picked so close to cooking, or because the spinach had been allowed to reach a greater level of maturity?
Posted by Emma at 8:53 am

This sounds great. We just did something on similar lines with red leaf lettuce and bacon. I LOVE bacon on salad!!

Some years ago, we had an amazing spinach salad with thinly sliced red onion and blue cheese. It was dressed with a raspberry vinaigrette.

Another spinach salad we like is with figs, red onion, thinly shaved Parmiggiana and a simple vinaigrette. It's killer.

Hello there! I'm so glad you left a comment on my blog because now I can devour your entire site! This recipe sounds utterly heavenly and I cannot wait to try it this weekend. C'mon, spinach and bacon??????? A match made in heaven.

Speaking of heaven, I see you are in New Zealand. I am now officially 250% jealous!

Elizabeth - those salads sound divine, I know what I'll be doing with the next harvest in about a month!

Matt - bacon and spinach - how could I disagree! About NZ too!