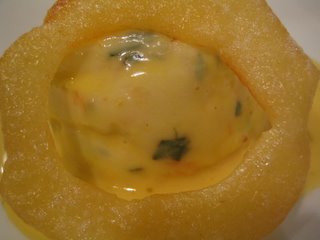 I was very happy to see the announcement of Paper Chef #16 on Tomatilla! - finally a chance to use the bottle of verjuice in the cupboard. This is my second bottle, the first went to make a delicious verjuice sorbet - a perfect sorbet (simple syrup and verjuice), and was used once to deglaze a pan. The other ingredients are basil, prawns and an ingredient inspired by the movies in honor of the Oscars.

Basil and prawns are fine, but the Oscars - I was a bit lost. I tried to think about King Kong, a film made down the road. I then tried to think of Narnia, but turkish delight cannot go with prawns (or maybe it can melted as a sweet dipping sauce . . . ?). I entertained the notion of a surf and turf using (Wallace and Grommit's Ware-)rabbit and prawns, but just didn't fancy it. I kept coming back to something golden to represent the Oscar himself. And then it came to me :

Golden wafers (in the shape of an Olympic ring for bonus points!) to accompany a prawn and basil mousse and a verjuice sauce.

This is what I did :

Blend the butter, flour and verjuice together until smooth, mix in the egg white and salt and pepper. Spread thinly on a lined baking sheet in the shapes required. Bake at 180°c for 8 to 10 minutes or until golden.

Melt the butter and stir in the verjuice, egg yolks and cream. Cook on a low temperature, stirring well until the sauce starts to thicken. Strain through a fine sieve to remove the egg threads. Return to the heat, add the prawn stock and continue stirring until the sauce is thick and coats the back of a spoon. Season with salt and pepper.

Prawn and Basil Mousse
based on a Stephanie Alexander recipe from the cook's companion.

Peel and devein the prawns, reserving the shells and heads for stock if you like. Mince the prawns in a food processor until smooth, saving a few whole for texture later. Add the egg whites, salt and Kaitaia fire and process until stiff and shiny. Chill at this point for at least an hour.
Make prawn stock by covering the shells and heads with water, simmering until the stock is flavourful and the shells are pink. Strain the liquid then poach the reserved prawns in the simmering stock. Roughly chop the prawn meat.
Lightly butter 4 small moulds and fill a pan as a bain marie with water that will come 3/4 of the way up the moulds. Put the bain marie in the oven at 150°c.
Beat the cream into the chilled prawn mixture then mix in the prawn meat and basil. Fill the moulds, pressing down to remove air bubbles, and then cover each with a piece of greaseproof paper. Put the mould in the bain marie and cook for 15 minutes or until firm and a knife inserted comes out clean. Turn out onto a plate, coat with the verjuice sauce and serve with golden verjuice wafers.

These are very rich, a small mousse, sauce and wafer would make a wonderful entree.
Posted by Emma at 7:37 pm

Email ThisBlogThis!Share to TwitterShare to FacebookShare to Pinterest
categories: starters

Thanks Barbara - they were really good. I think the mixture would also be great dropped into a Tom Yum type broth to make prawn balls.
Emma

The results for Paper Chef are now online.

That looks very tasty. I'm going to have to try the wafer recipe.

Congratulations on your award.

Lovely Emma! Great imagination that you have!!
So sorry to have missed you in Wellington too, but guess what, I surely will come back! Love it too much!!!