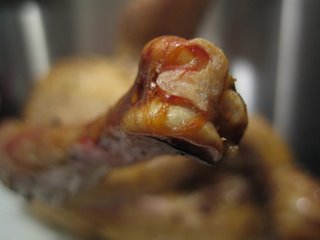 I had not eaten pheasant before so when the butcher told me they were getting in some fresh pheasant, duck and quail I knew what I had to do. I ordered a pheasant and then started to do some research.

Most people I spoke to said that pheasant was dry and full of shot. Sounded pretty good. However my mother reassured me by saying she thought it was delicious but you have to be careful how you cook it because it does have a tendency to dry out. That was more like it! As long as you have to just be careful things should be OK. I can be careful, in fact I usually am.

I picked up the pheasant still not entirely sure how I was going to cook it, so just to be careful I also got some streaky bacon* for laying across the breast to combat the dreaded dryness.

It was really good, up there with my favourite meats - the best description I can give to the other not-yet-pheasant-initiated is that it tastes like really, really good chicken. Of course it does.

In the end I cooked the pheasant like this :

A few hours before you want to eat unwrap the pheasant and remove the giblets from the cavity to a bowl for later**. Cut off the first wing joints and add to the giblets. Rinse the pheasant inside and out and dry with a paper towel. Season the pheasant inside and out with salt and pepper. Put some rosemary, thyme, tarragon, a strip of lemon peel, clove of garlic and a knob of butter in the cavity and put in the fridge to wait so the flavours can penetrate the meat. Do not truss.
When you are almost ready to cook, remove the pheasant from the fridge to come to room temperature.
Preheat the oven to 220°c.
Prepare the roasting tin by buttering a slice of bread and laying the pheasant on its side on the slice of bread***.
Roast for 12 minutes then turn over to rest the other side on the bread and roast for another 12 minutes.
Remove from the oven and leave to rest, tented with foil on a chopping board, for at least 15 minutes.
Served with sautéed potatoes and a garlicky dressed green salad for a blimming delicious meal.

*I didn't end up using it for the pheasant, but instead here, and for some bacon sandwiches.
**Game sauce to come!
***Very important for a special treat, details to come soon. And to stop the pheasant sticking.
Posted by Emma at 9:02 am

My son discovered a taste for pheasant when he did a student exchange in France. I'll have to try your recipe when I find pheasant in Auckland that isn't frozen.

Barbara - Maybe you could email the butcher (http://www.meatontory.co.nz/) and see if they could get a fresh one to you? Emma