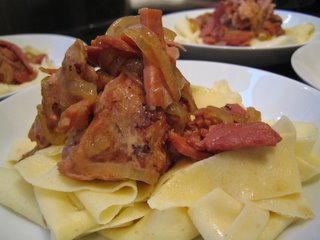 I wanted to come up with something new for IMBB # 22 Use Your Noodle as hosted by Amy, but I am not sure that I have. Lappardelle or rabbit stew with pappardelle is not really anything new ; noodles are a traditional base on which to serve a stew and rabbit stew is a great way to prepare rabbit. Well maybe the name is new?

For four of us, anticipating being hungy at the end of a day at the races I made lappardelle :

In the morning I fried the onions and garlic in a bit of butter until all was slightly golden, adding the ham once the onions were starting to turn. While the onions were frying I made the noodle dough, wrapped it, and put it in the fridge to rest.
Once the onions were soft and golden I removed them to the crock-pot. I put a wee bit more butter in the frying pan, turned up the heat and fried the rabbit pieces briefly on each side until golden, seasoning with salt and pepper as I went, then added them to the crockpot.
I made a light roux in the frying pan with the flour and the remaining butter, pouring in a bit of the cider to help it out of the frying pan and into the crock-pot.
Tuck the bay leaves and juniper berries in the crock-pot and pour over the rest of the cider.
Set the crock-pot to Auto and head off to the races.
When you have returned, perhaps a bit poorer than when you set off, check the seasoning of the stew and put a large pot of water on to boil for the noodles. Roll out the noodle dough as thin as you can and cut into thick ribbons laying them out on a tea towel as you go to dry slightly. When the water is at a rolling boil salt it then drop in the noodles. They will not take long to cook so keep your eye on them. Drain them well tossing the colander to release any trapped water, then add a knob of butter to lubricate the noodles just a bit.
Serve the stew on top of the noodles.
Put a bone-bowl on the table and warn people the rabbit has bones in it.

Interesting name - maybe you can claim rights to it and trade mark it. Great dish that will go well on rainy and cold nights.

Yes! And make loads of money I hope!! I will set my legal team to it stat! It is a great winter dish, but also pretty good on a cool summer's evening . . .