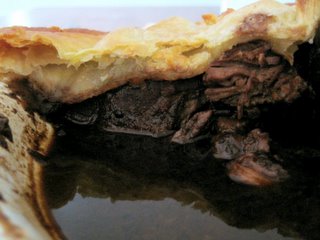 Steak pie is a New Year's day tradition in our family. Greig remembers always having a steak pie on New Years day when he was growing up in Scotland. Steak pie is eaten on New Year's day because it was a special treat, could be prepared ahead of time and was good winter food. But I really can't think of a more restorative meal for the day after New Year's Eve - summer or not.

I make steak pie like this :
Lightly toss 1 inch cubes of beef in seasoned flour. I use silverside (uncorned) because it will stay in chunks and not fall apart with long cooking. Brown in batches in a mixture of olive oil and butter, taking care not to over crowd the pan and therefore start stewing the pieces. We want nice brown crust at this stage! Remove to a plate as each batch is done. I use a Le Creuset French Oven

so I can do the browning and the stewing in the one pot.
Lightly fry a thinly sliced onion then return the meat to the pan. Pour over some liquid, I use beer, home brew Chocolate Stout to be specific, because it seems like the right thing to do. Cover the pan and put it in the oven to cook gently for several hours* until it is tender, cooked, and delicious. If it seems necessary to reduce the gravy then remove the meat and boil the liquid until it is the right consistency. Adjust the seasoning and allow the meat to cool in the liquid. Refrigerate until you are ready to make the pie. 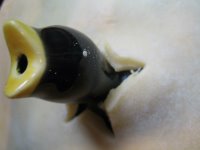 On New Year's day, put the meat and some of the gravy into a pie dish, roll out pastry to cover the dish, making sure you cut a little hole or include a pie vent to let the steam escape.
Decorate the pie as you like then put in the fridge to rest for at least thirty minutes. Preheat the oven to 180°c. Brush the pie with beaten egg or milk and cook for 25 minutes or until it looks golden and ready.
We serve steak pie with boiled new potatoes, peas and the extra gravy.
What a fabulous way to start the New Year!

* I received On Food and Cooking: The Science and Lore of the Kitchen

by Harold McGee for Christmas, so this year I decided to follow the instructions for tender stewed meat. I cooked the pie filling for 2 hours at 95°c then for another 2 hours at 120°c. I think it worked!
Posted by Emma at 10:04 pm