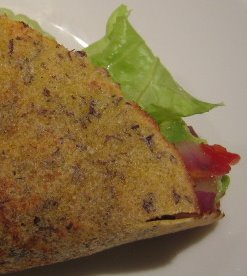 I love making tortillas. So what must naturally follow from a successful recipe? A bit of fiddling to see what else you can do! Well, what I tried as a variation on the flour tortilla was to substitute some of the plain flour for a different sort. In this case a buckwheat and corn polenta that I found at truffle.

Buckwheat polenta is also known as "Polenta Nera" (Black Polenta), which really isn't so black just a light golden grey with a few flecks of black to give it some detail, so to speak. I am dying to make a soft polenta dish with this but at the rate I am making tortillas I might have to buy another packet reserved especially for polenta!

Once again I made these using a chappati press but rolling would be just as good, but my dough was fairly soft so it would be trickier. I also found that these tortilla were crispier and more brittle than the flour only ones, as you can see from the photo. I think they would make great tacos maybe baked in the oven hanging on the bars of the shelf to form a truely crisp taco. As it was they became taco, less by design, more by accident - but they sure tasted good!

Buckwheat and Corn Tortilla
makes about 12

Mix the flour and the salt together then rub in the fat. While stirring with a wooden spoon, add enough boiling water to form a dough then knead briefly. This dough will be quite soft, but the polenta will absorb some while it rests so err on the side of wetness.
Wrap in plasitc and rest for an hour. Heat a cast iron frying pan to hot.
Divide into 12 pieces and either using a tortilla/chappati press or a rolling pin form circles as thin as you can, cooking them for 30 seconds per side, or until then have golden patches and are puffy, then wrapping in a teatowel to keep warm and soft.