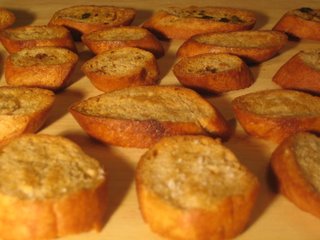 When I saw that Bron had chosen bruscetta and crostini as the theme for Hay Hay Donna Day #4 I thought it was the perfect opportunity to try out something I had been thinking about for a while.

I quite often make crostini as a way to use up the last bit of a baguette or ficelle. Having crostini in the cupboard is a great thing, they keep so well and make a brilliant snack with a bit of whatever is kicking around in the fridge to call a topping. More and more often I will use part of the dough when I am making bread to form into a ficelle just so I can make crostini.

I usually just make the crostini plain, but why not experiment with flavouring the toasts themselves as well as with the toppings? Why not indeed?!

So I give you four ways with crostini and some suggested toppings :

Plain - Slice a ficelle or baguette and brush or spray both sides with olive oil. Spread out on a baking sheet and bake at 180°C for about 10 minutes, turning over half way through, until golden and crispy. Top with - lightly crushed pieces of peppered mackerel.

Garlic - [my favourite!] Make as for plain, but when they are cooked rub a clove of garlic over the pieces. The garlic will grate onto the crostini, leaving a wonderful garlicyness. Top with - onion jam, half a black olive and a bit of anchovy fillet.

Mushroom - Make as for plain, but sprinkle the oiled pieces with some dried mushroom powder before putting in the oven. Top with - a paste made from mashed feta and some yoghurt with a few drops of truffle oil on the top.

Spiced - Make as for plain, but sprinkle the oiled pieces with a mixture of spices before putting in the oven. Top with - mashed leftover kumera made in the style of hummous with a bit of tahini and some more of the spice mix used on the crostini.

I was a little late with this so the round up is already done - I'll try better next time!
Posted by Emma at 9:08 am

What a pity you missed out Emma. I've never thought of the Kumura version. It sounds very tempting.

Awesome Emma, they sound fantastic, like Barbara I'm also very tempted by the spiced kumara one.
I've added you into the roundup!
Cheers

Thanks! The kumera version evolved from padding out some left over chickpeas with left over kumera to make hummous, so what do you do when there are no chickpeas to begin!