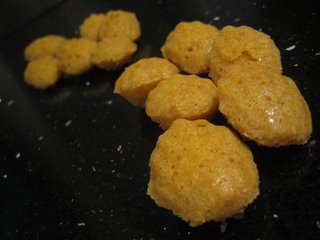 Addendum : These go really well with a good garlicky guacamole.
After finishing taking the photos and writing up this post we ate the madeleines and decided to make a guacamole to go with them to use the perfect avocado sitting on the shelf. Lovely. Corn and guacamole are always a good combination.
Posted by Emma at 10:34 am

These look terrific Emma! Fantastic substitute to corn chips with the guacamole, what a clever chook you are!
Hope I have my entry ready in time!!

I hope you do too Bron, looking forward to seeing what you come up with for the Independance theme.

I have just discovered how great it is to bake with polenta, it gives things that delightful crunch. Your madeleines look gorgeous! And happy independence day!

Clever use of the ingredients Emma. I wonder what Proust would say if served these with his tea.