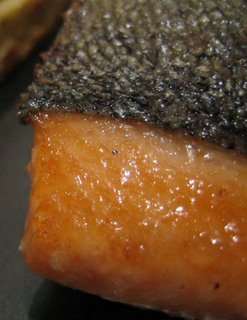 My friend Helen, who lives in Twizel, made my day on Wednesday when she called to tell me that some salmon would be winging its way to me in Wellington that evening. This salmon was so fresh that at the time Helen called me the fish would have still been swimming.

Twizel is important to a salmon eater because there exist several canals in which the salmon can swim. These canals carry water between lakes Tekapo, Pukaki and Ohau and Benmore. Intensively farmed salmon does not have to exercise, because the water is generally not moving ; however the Twizel salmon have to swim against a fast moving current. Intensively farmed salmon are identifiable in many ways, but perhaps the most obvious is the disproportionately large body to the head, due to fast and easy fattening.

The salmon I received was amazingly fresh, without much visible fat, and actually a lot thinner that other fillets I have had. I wanted to eat this salmon very plainly, and enjoy every mouthful just as salmon.

First of all I cut some slices from the tail end as thinly as I could to eat as sashimi. All we needed was a spot of wasabi, some soy sauce, and a wee pile of finely grated daikon to eat between mouthfuls of salmon. This was amazing, just pure soft, melting salmon. Delicious. 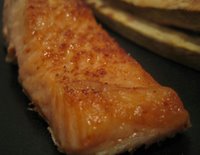 Then the main course - my favourite way to prepare salmon. Oven seared. Lightly seasoned, and cooked hot and quick. No mucking around.

Put a heavy pan, I use my cast iron frying pan, in the oven and preheat to the highest temperature - 250°c for my oven.

Rinse and dry the salmon steaks and season lightly on both sides with salt and cayenne.

When the oven and pan are good and hot, lay the salmon in the pan skin side down, cook for 4 minutes. Turn the salmon over and cook for another 4 minutes.

Serve with lightly cooked greens for a delicious and healthful meal.

Some notes : The salmon will release some fat as it cooks which can spit as you turn the salmon over - be careful. Adjust the cooking times according to the thickness of the fillet and how you like your fish cooked. These times will give a good crust but leave the middle quite moist. I also like to leave the pan in the oven for say 20 minutes once it gets to temperature to ensure the pan is as hot as possible. Oh, and put the pan in the oven before you heat it up so a cold pan does not get shocked by a very hot oven - appently this can cause cast iron pans to crack.