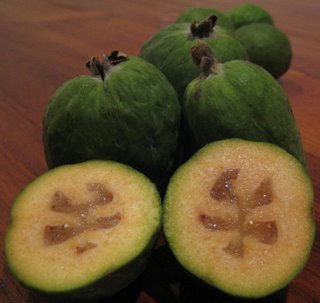 Sadly, the feijoa season is all but over. My favourite fruit. Something of which I have a hard time enjoying just one, I always think a pile of them do the wonderful flavour more justice.

Like vegemite, there is no middle ground with feijoas, you either love or hate the flavour. To me feijoas are a completely unique flavour, but I have heard them described as banana-like but with a citrus flavour. A friend of mine describes them as tasting like iron ; which I like to hear because it means that I get presents of huge boxes of feijoas from her several dozen trees!

My mother makes feijoa chutney, several people I know make feijoa jam, stewed feijoas feature in pies and sauces, and a friend of mine is about to bottle his home made feijoa cider. But the only thing I can ever bring myself to do with this fruit is to eat them raw, by themselves, scooping the flesh from the skin of each half with a spoon. So delicious.

I wonder if feijoas are as popular outside New Zealand? Are they treasured in their native land, South America? How are they treated in our biggest export market, America?
Posted by Emma at 7:56 am

Hi Emma,
Feijoa are known as pineapple guavas outside of New Zealand.
I agree you either hate them or love them... I enjoy them in smoothies mostly.
However thickly sliced feijoa also make cool little canape bases topped with creamcheese or mascarpone etc.
They're also cool chopped up as a salsa with fish or chicken.

Bron - I love the idea of using them as canape bases!

I don't know that I've ever seen one of these (of course, they may be on some of the fruit stands and I just didn't notice them...)

I adore guava - although it's not all that easy to come by here in Canada. Is the taste of a feijoa at all similar to that of guava?

I had never heard of feijoas until I came to New Zealand and, as far as I know, they're not widely available on this side of the world (Ireland) but I did come across a handful on the organic fruit and veg stall at the market in Dublin's Temple Bar. Couldn't bring myself to buy them, though...the thoughts of all those air miles put me off!

Crazy that they would put fejoas on a plane to sell at a market in Dublin. Perhaps if you were desperate for a taste of home, but the airmiles would put me off too!

Elizabeth - I don't think that fejoas taste anything like guava - perhaps you need a trip to NZ (or Dublin!) at Easter sometime?!