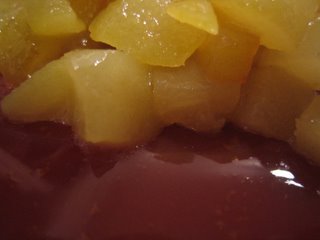 Caligula, Roman Emperor from 37 to 41 A.D., was known, among other things, for his extreme extravagance. However the carrot is the reason I mention Caligula today, Saint Valentine's day. The carrot has been known since Roman times as an aid to seduction. Perhaps this was the reason Caligula, in the hope that the aphrodisiac properties of carrots would work, treated the Roman Senate to a banquet of carrot dishes.

Aside from the rich and sensual colour, beetroot is rich in boron which is essential for hormone production and as such has been considered an aphrodisiac since ancient times.

Honey I have already mentioned.

All this talk of aphrodisiacs is easily explained with the mention of slurp & burp and Paper Chef - Thanks MagicTofu! The ingredients for this, the 15th episode of Paper Chef are :

Beets
Pears
Lime
Aphrodisiacs
And why not use the juice of such sweet vegetables as carrots and beets, just a touch of honey to sweeten and a pear and lime sauté to top things off nicely? The mystery ingredient of aphrodisiacs was satisfied not only with the carrot and the honey, but as a surprise bonus aphrodisiac, the beets as well. How lucky are we?

Beetroot and Carrot Jelly with Pear and Lime Sauté :

750 mL of beetroot and carrot juice*
3 leaves of gelatine
2 teaspoons of honey
2 pears, cut into small chunks
1 tablespoon of butter
1 tablespoon of caster sugar
Juice of one lime.

Soak the gelatine leaves in cold water for 5 minutes. Heat 100mL of the juice until almost boiling and stir in the honey. Squeeze the water from the soaked gelatine and whisk into the hot juice. Add a bit of the cold juice to the hot liquid then mix the hot into the cold. Pour into a mould to set. It will take at least three hours to set in the fridge.
Melt the butter in a heavy frying pan and sauté until the pear begins to colour. Stir in the sugar and the lime juice. Remove from the pan to cool.
Serve the jelly with the pear sauté.

A light, refreshing jelly came to mind as a good Valentine's Day desert, a time that a heavy dessert would be wrong. On another evening this would make a good and unusual entree or perhaps a refresher for a more involved dinner.

*I do not have a juicer so I bought a large beetroot and carrot juice from a juice bar to use for the jelly.
Posted by Emma at 8:42 pm

You are right, the color of beets always has some sensual appeal. I like the idea of sauteing the pears it's a simple trick that works so well with pears.

Very interesting. I had no idea that the carrot was an aphrodisiac.