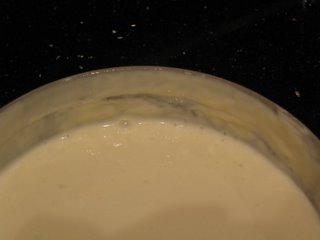 I have been making yoghurt for a year or so now and I am always dissapointed when I haven't been organised enough to have made my own and have to buy a pot of commercial stuff. I cannot believe I used to buy low fat artificially sweetened "yoghurt". The last time I had this reconstituted-milk-powder gelatine-thickened nutrasweetened product was so long ago I can hardly remember the taste, so unremarkable it must have been, except that I was dissapointed.
My mother used to make yoghurt in an wee electrical device with 6 or 8 pottles (love that word!) which she would make in the evening and would be ready for breakfast the next morning. She used to make this from milk and a starter saved from the previous batch.
Yoghurt is so good for you. Proper, live, real yoghurt anyway. It is debatable that the regular commercial stuff is not actually bad for you - in my opinion.
Yoghurt is a dairy product made by the bacterial fermentation of milk. The bacteria concerned is most commonly a combination of Streptococcus salivarius and thermophilus, and a Lactobacillus such as acidophilus, bulgaricus or bifidus. If the yoghurt is not pasturised after fermentation and is therefore still a living organism it is considered live and carries the most health benefits. Because the lactose has been partially digested by the bacteria during fermentation, those people who have experienced lactose intollerance with other milk products may find that they have no such problems with yoghurt or for that matter cheese.
My recipe for making yoghurt is this :
Bring 1 Litre of full cream, non homogenised if possible, milk to the boil in a large pan since we all know how milk likes to boil over. Stir the bottom of the pan as it comes to the boil to prevent sticking. Once it has boiled you can stir it less often, but watch for it boiling over. Reduce this litre of milk by a third. I measure this by marking a wooden chopstick with the litre mark and again at the two-thirds mark. Once it has reduced, strain into a china bowl and add 75mL of cream and stir well. Leave to cool until you can hold your little finger in the milk to a count of ten. Stir in 75g or about 3 tablespoons of yoghurt from the previous batch. Cover tightly and leave in a warm place, perhaps wrapped in a towel for 8 hours - overnight is perfect. If this is your first batch then you will have to buy some yoghurt unless you can borrow some from a yoghurt-making friend. Just make sure you buy live yoghurt so those bacterium are still alive and kicking.
Posted by Emma at 8:41 am